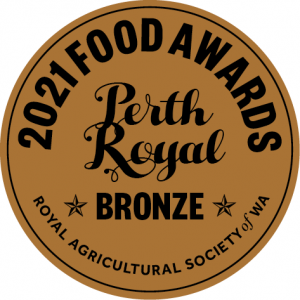 Wax Lyrical is the first spirit released by HHH. Its signature ingredient is the leaf of WA native Geraldton Wax (Chamelaucium uncinatum), expertly blended with juniper, coriander seeds, angelica root, cassia bark, liquorice root, calamus root, almond and lemon peel to produce a unique savoury but sweet Gin with a special distilling technique that draws out additional cassia flavour. Reports for numerous customers is that they are drinking it neat!

The discovery of Geraldton Wax came through a dear Aboriginal man on a Main Roads road construction project near Muchea in WA. While erecting fencing next to a flower farm, Mick said to Hilton, “Mate, go rub some of those leaves in your hands and smell it.” The smell was delicious and Hilton replied, “Mick, this will do well in a gin.” Wax Lyrical is that gin 20 months after the discovery.

A chance encounter with one of the three ‘true blue Aussie blokes’ running the Scotch Down Under YouTube channel, resulted in an independent review of Wax Lyrical just after its first release. Its nose was likened to the smell of fresh rain on Aussie bush and the overall verdict was a rating of above 9.5 and ‘it’s Australia in a bottle.’ Good onya guys!

The first batch of Wax Lyrical Gin was released on 16 September 2020.